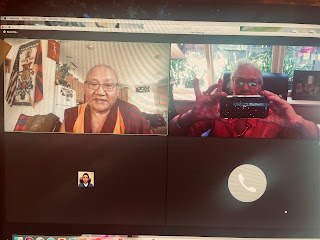 We were blessed Sunday, July 17th, to have Geshe Thupten Phelyge join us from E. Spokane, Washington as our speaker.  He spoke of his own journey, fleeing with his family as a young boy from Tibet, and his life as a Tibetan monk, studying under HH the Dalai Llama and becoming in time, a Gesh-la, after studies and a 5 year retreat in the mountains above Dharmsala.

Grantland and Geshe-la met and were good friends for several years before Grantland passed. Having served in the Tibetan parliament for several terms, before it was dissolved by the Dalai Llama, Geshe and Grantland had common areas to share. Geshe-la chanted to open Grantland and Lee's wedding and prayed over Grantland for several days, and sent his spirit in protection shortly after his passing.

All of Cohort II and two of the mentors (Sandra, Board Treasurer and grad, Gwen Wilson) were also present with Mahi, Leslie and Lee to enjoy his wisdom and blessing.

His words resonated.   WALK THE FLOW.......💜and the Institute felt blessed🙏