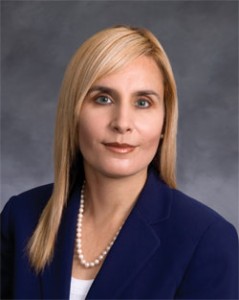 A prominent figure in Sacramento for over two decades, Melinda Guzman is a leading litigator and business advocate with a footprint that goes well beyond the River City. Melinda is now leading her own law firm where she represents business clients and individuals through all stages of the litigation process and provides counsel that produces results. Her consistent, honest and prepared approach has garnered her respect from her clients while her quick wit makes for formidable opposition to opposing counsel and productive mediation sessions.

Melinda has extensive corporate governance experience and regularly speaks and trains on the fiduciary duties of Officers and Directors of Boards. Since 2007, Melinda has served as an independent director for the Federal Home Loan Bank of San Francisco where she is currently Vice Chair. She served as an independent director of Pac-West Telecomm, Inc. from 2004-2005; a publicly traded telecommunications company located in Stockton, California. In recognition of her significant experience serving on public and private boards of directors, Melinda has been honored as a Fellow by the National Association of Corporate Directors.

Melinda advocates for small business. She served as General Counsel of the United States Hispanic Chamber of Commerce and of the United States Hispanic Chamber of Commerce Foundation from 2004 - 2010. She assisted in all aspects of the USHCC operations, including oversight in managing its approximate $11 million annual budget and management of USHCC assets which included a national television program which reached 88% of the US Hispanic market, its interests in a $150MM venture capital fund, its interests in a national magazine and a subsidiary in Mexico. She is currently General Counsel to the National Utilities Diversity Counsel, the California Emerging Technology Fund, the California Tele-health Network, MAAP, Inc. and several other companies.

Melinda is engaged in her community. She is a former Trustee for the U.C. Davis Foundation, former Director of the Make A Wish Foundation and of the KVIE PBS and Davis Community Television stations.

Melinda was born and raised in Fairfield, California and is the daughter of the late Amado Guzman and Anita Guzman. She is a first generation college graduate and currently resides in Fair Oaks, California.